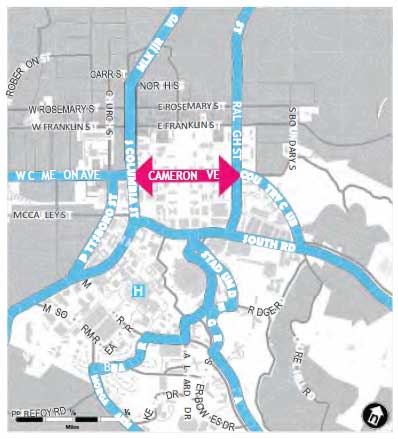 The improvements to East Cameron Avenue will further improve east-west connectivity for bicycle travel into and through the campus.

There is an approximate 24-foot curb to curb width.
Approximately 6,000 vehicles use East Cameron Avenue per day at a 25 mph speed limit.
There are no existing bicycle accommodations.
There are 6- to 10-foot sidewalks on both sides
Frequent pedestrian crossings result in slow speed traffic.
Wikimap users called this segment both a high- and low- stress route.
The roadway is maintained by the Town.

Add shared lane markings in the center of the outside lanes with a single BICYCLES MAY USE FULL LANE sign posted on the east and west end approaches to the segment to minimize sign clutter.